The Nature of Trauma and Its Effect on the PTSD Brain

Trauma is a tricky subject. The word “trauma” gets thrown around quite a bit and there seems to be a subjective nature to its definition. With the mentioning of trauma often comes the phrase “Post Traumatic Stress Disorder” (PTSD), which is a legitimate mental disorder listed within the Diagnostic and Statistical Manual of Mental Disorders (DSM). What makes PTSD unique from other mental disorders is that it requires a traumatic or stressful event as a diagnostic criterion.

However, what makes trauma tricky is defining what a traumatic or stressful event actually is. This is where trauma can get a bit subjective. What may be considered stressful to one person may simply be routine to another. That’s why most definitions dealing with trauma generally focus on traumatic events that are widely accepted to be traumatic, such as natural disasters, rape, domestic violence, severe illness or injury, death of a loved one, and witnessing or experiencing an act of violence.

So, what exactly, defines trauma and constitutes a traumatic event? And, how does this event lead to the possible development of PTSD? What, exactly, is PTSD and how does it affect the brain? Finally, how do individuals with suspected cases of PTSD come to terms with the traumatic event that has changed them? This article aims to provide answers to all these questions and clarify some of the confusion surrounding trauma and PTSD. 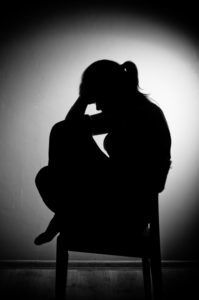 First things first, what is trauma and what constitutes a traumatic event? The American Psychological Association defines trauma as, “an emotional response to a terrible event like an accident, rape, or natural disaster”. The National Institute of Mental Healthdefines a traumatic event as a “shocking, scary, or dangerous experience that affects someone emotionally”.

Both definitions agree that an event must occur to initiate trauma from a psychological standpoint. They also agree that the event causes an emotional response in the individual experiencing or witnessing the event. However the first definition focuses on experiences that are commonly accepted as traumatic, while the second definition leaves a more open-ended interpretation by describing the event as “shocking, scary, or dangerous”.

But, how is trauma defined in terms of PTSD? According to the most current edition of the Diagnostic and Statistical Manual of Mental Disorders (DMS) the criteria for post-traumatic stress disorder are as follows:

Therefore trauma, as defined by psychiatrists and psychologists, also places significance on an event that is experienced or witnessed by an individual that faces an actual or perceived deadly situation. However, the emotional response to this traumatic event is more explicitly described through the mentioning of intrusive symptoms, avoidant behaviors, negative alterations in mood, noted instances of reactivity, the prolonged occurrence of said emotional response, and the fact that the emotional response can cause impairment in social, occupational, or other key areas of functioning.

How does a single event have such a large impact on an individual? Essentially a single traumatic event can completely alter an individual’s emotional well-being so drastically that it can change the way they function in all areas of their life. Why is it that, for lack of a better phrase, trauma is so hard to just get over? Simply stated, it’s because trauma actually changes the way the brain functions.

About the Human Brain:

Before looking into the specifics about how trauma affects the brain, we need to establish a very basic background on how the brain functions in normal situations. Listed below are some key terms that will come up in conversations about the brain’s normal functions. 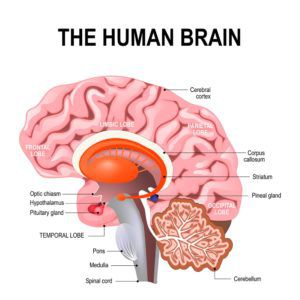 It is also important to note that the brain continues to develop during different life stages from in utero to late life. The majority of brain development does occur in utero, however in the first five years of life both grey matter and white matter structures continue to develop and increase the size of the brain. Grey matter affects muscle control, sensory perception, speech, decision making, and self-control. White matteraffects learning, brain functions, and communicating with different regions of the brain.

From ages 7-17, there is more white matter volume than gray matter volume, although the overall size of the brain remains the same. During this time gray matter areas such as the frontal cortex and parietal cortex decrease in size, while the hippocampus and amygdala increases in size. From the ages of 20-70, caudate, diencephalon, and gray matter gradually decreases, especially in the temporal and frontal cortex. The amount of white matter stays the same during this period.

As you can see, the brain continues to undergo several changes through an average lifetime. When trauma occurs, it can affect different structures of the brain depending on what stage of the development the brain is currently in. That’s one small reason why trauma doesn’t always look the same in every person. Now, let’s take a look at what happens when the brain is faced with a traumatic event. 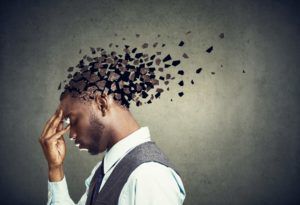 How Trauma Affects the Brain:

PTSD is characterized by intrusive thoughts, hyperarousal, flashbacks, nightmares and sleep disturbances, changes in memory and concentration, and startle responses. It is believed, but not yet proven, that these symptoms exist because the brain structure and function have undergone stress-induced changes as a result of a traumatic event.

The amygdala, hippocampus, and prefrontal cortex are stimulated during a stress response, therefore traumatic stress directly affects these parts of the brain. Individuals with PTSD generally show smaller hippocampal and anterior cingulate volumes, increased amygdala function, and decreased medial prefrontal/anterior cingulate function. Because the hippocampus, amygdala, and medial prefrontal cortex are altered, this can cause changes in memory function.

The hippocampus is especially receptive to stress effects and its functioning can easily be changed during prolonged exposure to stressors. Changes or damages to the hippocampus as a result of stress can cause individuals to have trouble with verbally declaring memories, which is perhaps one reason why memories of the event exhibit themselves through other means. In fact, the hippocampus can actually decrease in size as a result of traumatic stress, and this is seen exclusively in patients with PTSD when compared to other anxiety-based disorders.

Studies pertaining the the effects of PTSD on the brain have also noted other changes when the brain is exposed to traumatic cues. Some of these changes include: failure of activation in certain regions, increase in PTSD symptoms, decreased blood flow, and an increase in activity within certain regions. Very simply stated, the brain’s entire functioning is altered as a result of exposure to traumatic cues.

How to Treat PTSD:

Considering how largely PTSD affects the brain, the treatment for PTSD is not always a straightforward endeavor. However, there have been studies that have confirmed many benefits for various types of PTSD treatments. When addressing the symptoms of PTSD, it is important to remember that the treatment process is just that; a process. This means that it may take a few months to notice significant results and that progress may be slow at times. Nevertheless, seeking treatment for symptoms of PTSD is a beneficial way to address the constant traumatic stress resulting from a traumatic event. The sooner treatment is sought after the traumatic event, generally the better the results.

At NJ Family Psychiatry and Therapy, we specialize in treating individuals with PTSD, especially those who have been victims or witnesses of violence, motor-vehicle accidents, or work-related accidents. Depending on the individual and the case, we offer three distinct approaches to treating PTSD: Cognitive Behavioral Therapy, medications, and biofeedback, also known as “brain training”. 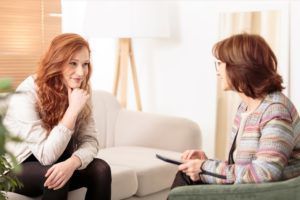 Cognitive behavioral therapy works to explore the relationship between thoughts, feelings, and behaviors, and then make changes to these areas that promote a better quality of life. It is believed that cognitive behavioral therapy can help individuals with PTSD by changing negative associations into positive ones and by coping with unhealthy understandings of their experience. 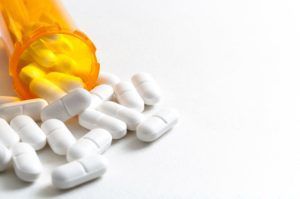 With PTSD medications, as with any medication, each patient’s response can vary. Because of this, the type and dosage of medication will likely be altered until and ideal outcome is reached. The American Psychological Association notes that some serotonin reuptake inhibitors (SSRIs) generally have the best results in patients with PTSD, followed by the serotonin-norepinephrine reuptake inhibitor (SNRI) venlafaxine.

SSRIs affect the activity of the neurotransmitter serotonin. Serotonin is associated with mood regulation and anxiety disorders. Currently, sertraline (Zoloft) and paroxetine (Paxil) are the only SSRIs approved by the FDA for use in PTSD treatments. However, the antidepressant fluoxetine (Prozac) has also been found to be effective, although it is considered to be an “off label” treatment for PTSD. Off label use of a medication, such as fluoxetine, simply means that the medication is being used to treat something other than its intended use under its FDA approval.

In addition to SSRIs, SNRIs can also be used to treat PTSD. The most common SNRI used in the treatment of PTSD is venlafaxine (Effexor), which can either act as an SSRI at low doses or and SNRI at higher doses. Topiramate, an anti-epileptic medication, has also been found to be effective in some individuals with PTSD, although it is not often recommended because it has potentially harmful side effects. 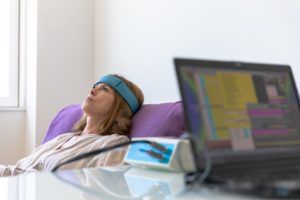 Biofeedback is a type of therapy that uses an individual’s visual and auditory processing to provide information about their physiological state. During biofeedback therapy, muscle tension, blood volume pulse, heart rate, skin conductance, hand temperature, respiration, and brainwave activity are measured by computers and electric sensors to determine how one’s body and mind are affected by stress.

The main goal of biofeedback therapy is to first establish awareness about these physiological processes and then to assist clients in eventually controlling these processes. Establishing awareness is the first step in learning how to control the symptoms that cause discomfort, pain, anxiety, dysfunction, and overall stress. Many patients that undergo biofeedback therapy notice improvements in attention, concentration, health, mood, sleep, and overall function and quality of life.

Biofeedback therapy is especially effective in the treatment of PTSD. Within the larger sphere of biofeedback therapy is something called neurofeedback, or electroencephalographic (EEG) feedback. Neurofeedback essentially uses a reward-based system to retrain your subconscious. Because of this, it is sometimes referred to as “brain training”. For individuals with PTSD, neurofeedback is used to train the brain to produce a calm state, which retrains the affected areas of the brain to produce brainwave patterns associated with relaxation and normal function.

Overall, trauma is a tricky subject in terms of its definition, effect on the brain, and treatment. Because of this, it is recommended that individuals showing signs of PTSD seek treatment from a professional to maintain the function and quality of their lives after experiencing a traumatic event. NJ Family Psychiatry and Therapy has extensive experience with compassionately and effectively treating individuals with PTSD. To experience the best PTSD treatment NJ Family Psychiatry and Therapy can provide our patients, schedule a consultation today.